HomeADHDClocks “fall back” on Sunday, 7... 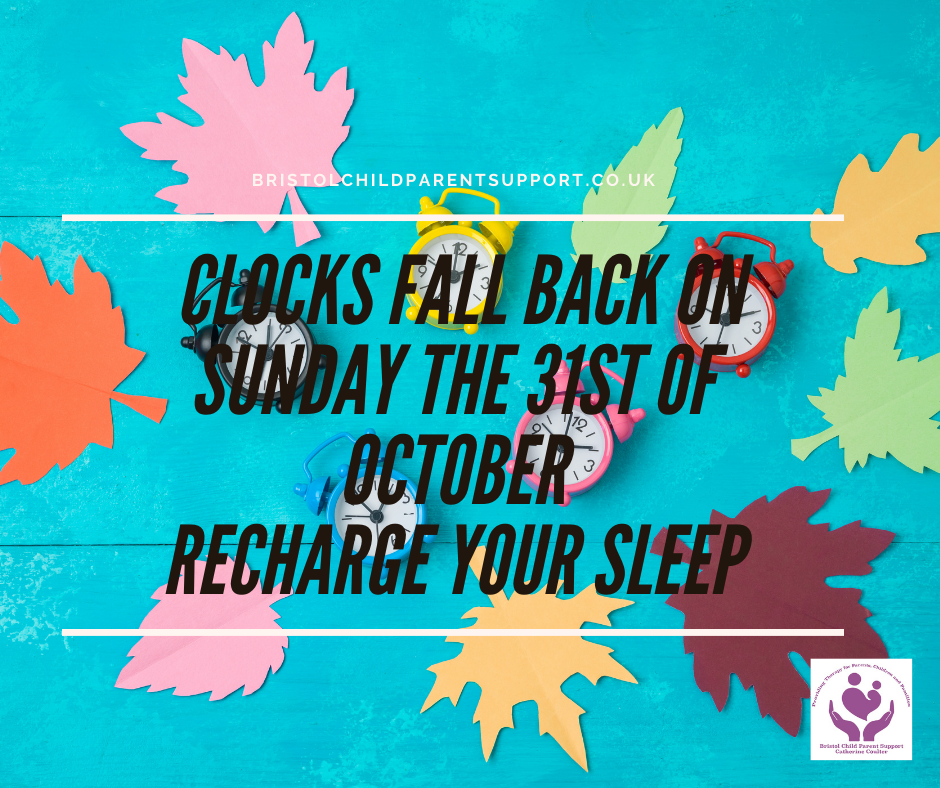 The leaves are changing colours, the weather is getting cooler….yes, it’s that time of year again, the end of daylight saving. The clocks “fall back” on Sunday 31st of October at 2 am. Obtaining enough sleep is now even more important. During “lockdown”, the Journal of Child Psychology and Psychiatry published a paper that predicted the potential for sleep problems to emerge or worsen following Lockdown (Ref: Sleep Council). Be proactive, manage the change for everyone to sleep well during these challenging and uncertain times.

A recap on the Paper, on the Impact on Sleep during Lockdown.

During the lockdown, the survey found that as many as 70% of children under 16 are going to bed later – but are also waking later (57%) – showing that a significant drift in bedtime schedules has already happened. This represents a clear risk with an obvious knock-on effect when schools re-open. In addition, The survey also reveals that a third of children are sleeping longer than normal, indicating that it will be harder to transition back to previous sleep routines once they return to school. Some parts of the country have already returned to a lockdown so I hope some of the solutions will help.

What happens when the clocks “Fall Back”.

What Happens to your 24 hour cycle, Circadian Rhythm?.

Our body’s internal sleep cycle (circadian rhythm) is regulated by light and darkness and heavily influenced by our environment. This is why we often become sleepy once it starts to get dark and many of us wake up with the sun. It is regulated by melatonin a hormone that’s made by the pineal gland in the brain, melatonin helps control your daily sleep-wake cycles. Typically, melatonin levels start to rise in the mid-to-late evening, after the sun has set. During the shorter, darker days of winter, your body may produce melatonin earlier or later in the day, which partly throws off your natural sleep cycles. As a result, you may experience fatigue, a drop in energy, mood changes, or other symptoms of seasonal affective disorder.  Natural sunlight affects melatonin levels in the mornings so do get out in the mornings.

How to help the whole family survive the end of Daylight Saving.

Sometimes, its really nice to leave the clocks alone for Saturday night. Everyone in the family can gently get used to the change and transition whilst you have a slow and leisurely breakfast.

Be patient and try not to worry. Everyone in the family may feel a bit sleep deprived and in general, it does go back to normal. There may some incidences of tantrums or tired behaviours, try not to overschedule in the following week.

Mistakes Parents make during Fall back and normally at bedtimes.

If your child struggles with transitions or change, help them to manage it. A week or at least three days prior to fall back, move your child’s bedtime earlier by 30 minutes and then return to the old schedule after the time change. For example, if your child normally sleeps from 7 p.m. to 6 a.m. encourage him to sleep from 6:30 p.m. to 6:30 a.m. for three days before falling back, then return to the old 7 p.m. to 6 a.m. schedule on the new time.

Your Baby and the end of Daylight Saving

Try to take it slowly, some babies may have an easy-going temperament and be able to go with the flow a bit more. If your baby is a little more temperamental, then help them to make the adjustment slow and steady leading up to the end of Daylight Savings Time. Then, you can slowly adjust your child’s schedule a little later.

Three days before Sunday you can start shifting your child’s schedule earlier by 20/30 minutes.

Within several days, you will be close to the new adjusted time with a later bedtime. If your child’s wakeup is becoming earlier, STOP, don’t keep shifting the schedule stay where you are, or even go back for a few more days. Ensure that you have your blackout blinds and keep the room dark.

Mistake No 2. You don’t realise your child is a lark or owl.

We really are divided into larks and owls due to an individual chronotype. And what you are is partly determined by genetics. This means some of us want to get up early and others want to stay up late. In addition there is a third type Ambivalent (those who are more adaptable to sleep schedules).

Is your child a lark

( early to rise, go to bed earlier) or an owl?( later to rise and stays up late).

According to Gwen Dewar from Parenting Science suggests that many parents are sending children to bed too early, long before they are physiologically ready to fall asleep. Their bodies haven’t yet produced enough melatonin, a key hormonal regulator of sleep (LeBourgeois et al 2013).

You or your child may like to stay up late or alternatively, like to get up early. According to Deborah Owen in a BBC science article Owls naturally like to keep late hours and sleep later, so they fare better in fall when the clock goes back an hour. Great for your teenager.

Mistake No 3. Allowing Exposure to bright blue light prior to and during the bedtime routine.

During the pandemic, many children were/are going to bed later and using screens. There is plenty of evidence that demonstrates that the “blue ” light from screens interferes and suppresses melatonin. Avoid bright light from screens at least 60 minutes prior to bed and keep screens out of bedrooms. In addition, LED lights are a regular feature in many homes now, moreover, emit this blue light. Due to the darker nights, try to change bulbs in the bedroom to those on the amber/red spectrum. If you are like me and working on Zoom, ensure that you also get out in the morning too.

Even though you may shift your child’s or your bedtime for a week to manage fall back, it is however important to stick to a clear and consistent bedtime routine that is in addition calm and simple. It does not have to be elaborate or long, keep it 35-45 mins tops and it simply looks like this. As part of this routine, positive sleep associations are important. Music, stroking, or massage, however, these should be at the beginning of the routine( before the story, you want to encourage self-soothing but not be responsible for it)

Mistake No 5. Offering food and drinks that are stimulating.

Caffeine is the most widely used psychoactive stimulant. It is bad news for children and adults alike. ( As you get older, the less effective your body is at getting rid of caffeine, it remains in your body for at least five to seven hours, important for nursing mums too).

Caffeine blocks adenosine receptors, this is linked to the homeostatic sleep drive. Although it has a complicated name, it is easy to understand. The longer you stay awake, the sleepier you are. Sleep drive essentially is your likelihood of falling asleep at a given time. Interestingly, this phenomenon is caused by the gradual accumulation of a neurotransmitter called adenosine during the day which is gradually reduced during sleep. The caffeine you take in foods or drinks will make you and your child feel less drowsy. Caffeine is not limited to coffee but is present in other foods such as:

Chocolate, chocolate cake, chocolate ice cream are full of caffeine. In addition, black tea, green tea, diet coke do too. Many teenagers drink high energy drinks, they are full of caffeine. Other foods instead such as food that contain tryptophan such as recommended below. Although these foods have been found to be helpful, more research is needed.

Mistake no 6. Exercising too near bedtime

It’s been more than difficult though the pandemic, and following a reduction of activities, you may want to return to after school clubs. however, we often underestimate how exercise keeps us all awake. Exercising raises the body’s temperatures and that prevents them from feeling drowsy. If you can ensure it is not 4-6 hours before bedtime.

Mistake No 7, Not ensuring the Bedroom environment is calm and cool.

Many parents make the mistake of the bedroom being too stimulating. Ensure that their bedroom is one your child associates
with bedtime. For example, keep toys to a minimum, or put them
away at night time. In addition, the optimum temperature for the room is around 65 degrees F. In addition ensure that child has the right form of bedding. Some children like duvets or some children like heavy blankets.

I do hope this helps in the coming weeks.

You are all parenting in challenging and uncertain times. Thank you for taking the time to read this and thank you for your commitment to the wellbeing of your child and your family and for your willingness to keep learning and growing. Remember: parenting is hard work and you all deserve support.  Please share the gratitude and love by sharing posts to those in need. If you need support contact me for a consultation or attend one of my workshops. With Love Catherine